Energy storage has been called a “swiss army knife” because it’s highly versatile, adaptable and can provide many different types of benefits to the grid. This flexibility can be financially rewarding. For example, when storage is deployed in behind-the-meter (BTM) applications, it can be programmed to target different value streams, like ‘peak-demand shaving’, ‘time-of-use arbitrage’, or ‘self-consumption’. These ‘value streams’ are effectively different ways for an energy storage system (ESS) to make money by reducing a customer’s utility bill.

Smart energy storage developers highlight the versatile nature of ESS when selling systems today. It’s a powerful selling point to show that storage can make money in different ways. It’s also a compelling value proposition to show that storage can adapt to future policy changes. For example, when ESS is paired with solar PV, storage can hedge against future changes to utility rate design or Net Energy Metering (NEM) rules, that erode the economics of solar. Storage effectively acts as an insurance policy to preserve future savings. In some cases, storage may not make financial sense from a pure return-on-investment (ROI) based perspective today. But if a customer is convinced that storage can future-proof their solar savings, this may be reason enough for them to pair ESS with their PV system.

Solar economics are getting eroded

Electric utilities all over the country are proposing changes to their utility rate designs and Net Metering frameworks. In Q3 2017 alone, 41 states took action on distributed energy solar policy and/or rate design, according to the most recent 50 States of Solar Report, published by the NC Clean Energy Technology Center. The types of changes being proposed and implemented are all different, depending on the state and utility territory. The one commonality they share is that the changes almost always erode the value of solar. Meaning that the ‘avoided cost’ that solar can achieve, gets diminished because of the policy change. A great example of this is the new Time-of-use rates (TOU) that went into effect in the San Diego Gas & Electric (SDG&E) territory in December 2017. The new TOU rates, which solar customers are now being defaulted onto, dramatically shift the summer season “on-peak” period (the highest-priced energy) from 11 am – 6 pm, all the way out until 4 pm – 9 pm in the evening. This radical shift erodes the ‘value of solar’, as afternoon solar production now gets valued at a lower-priced “mid-peak” rate, instead of the premium “on-peak” rate, as illustrated in the chart below for the DR-SES schedule. 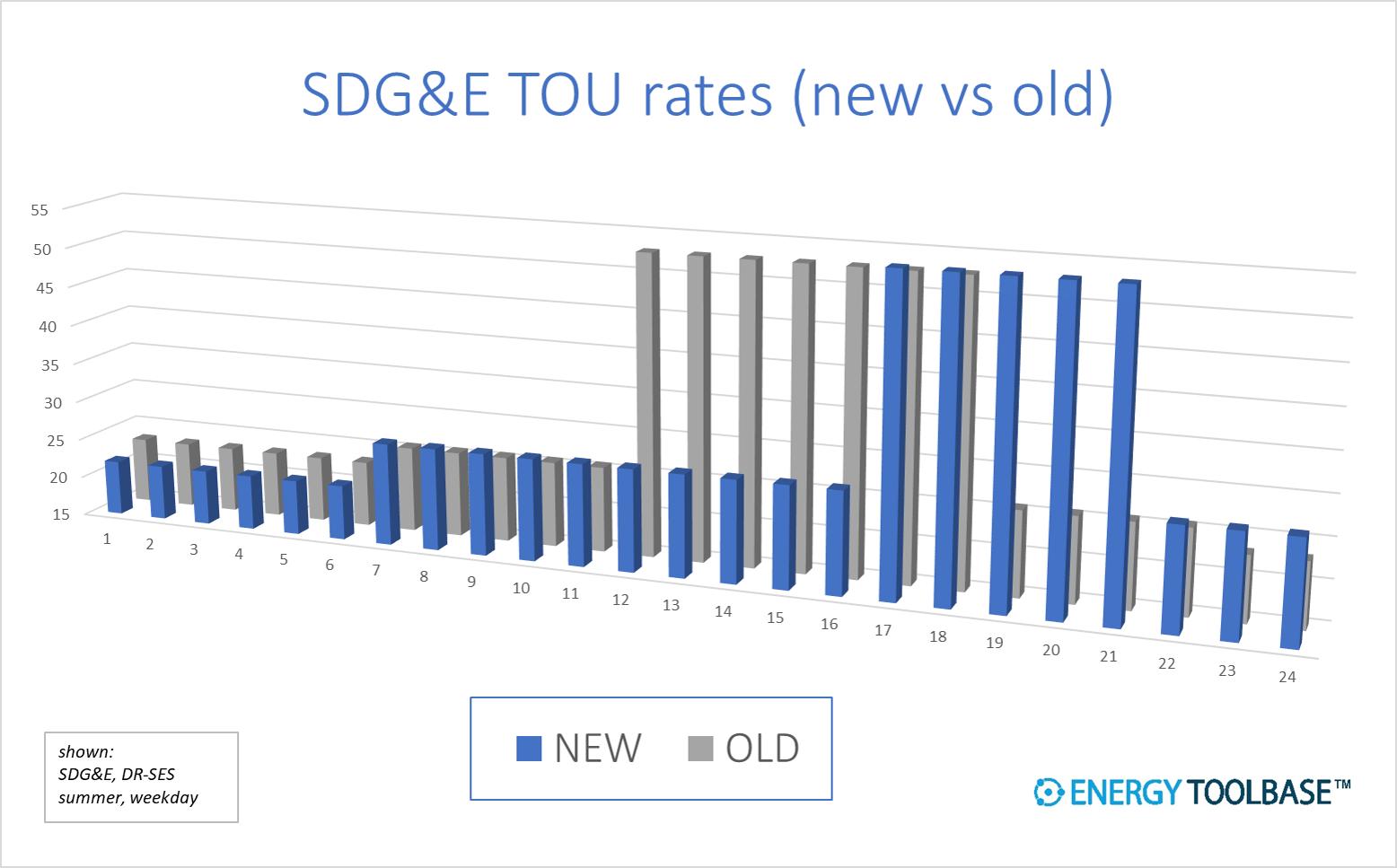 Note: in California, both Pacific Gas & Electric (PG&E) and Southern California Edison (SCE) have proposed similar TOU window shifts in their most recent General Rate Case filings, which are likely to get adopted in 2018.

Determining how much a change to rate design or NEM reduces the ‘avoided cost’ of a solar project is highly specific to each customer. As is quantifying how much an energy storage system can save them. The answer to both questions depends on a number of project-level specifics, like the load profile of the customer, their solar system size and production, the utility rate schedule they’re on, and the policy change that’s getting implemented. We published a new video tutorial that illustrates how to set up and model this type of analysis.

Turning a threat into an opportunity

Utilities all over the country are proposing and implementing new changes to their rate designs and NEM frameworks. These changes almost always erode the value proposition of solar. This is the reality today, and this trend is expected to continue. The good news is that this market threat for solar is an opportunity for energy storage. As storage can be adaptably re-programmed to help limit the erosion of savings from future changes. Many savvy solar and energy storage developers are leveraging energy storage’s ability to future-proof solar PV savings as a key selling point to close deals.