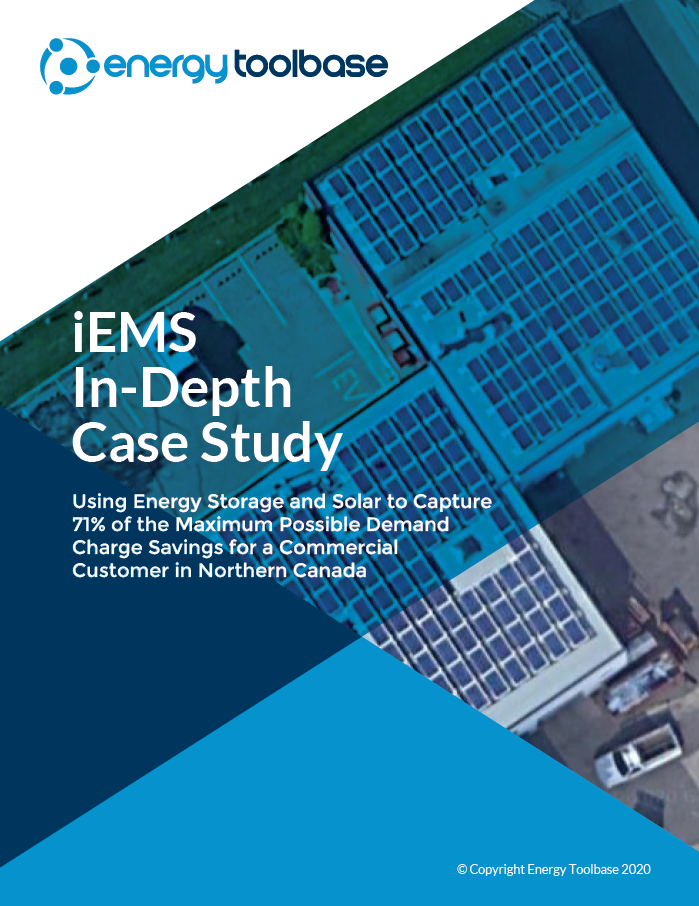 The Energy Toolbase Intelligent Energy Management System (iEMS) was installed alongside an Eguana Technologies storage system for an engineering and construction company in Alberta, Canada. The goal was to determine how efficiently the iEMS peak shaving algorithm could reduce demand for a facility with solar photovoltaic (PV) generation and electric vehicle chargers, located in a northern Canadian climate zone. The Energy Storage System (ESS) was commissioned in September of 2018. The iEMS was originally installed by Pason Power, who Energy Toolbase merged with in September of 2019.

The in-depth case study documents numerous challenges, learnings, and successes that occurred during the first year of operation. For example, we unpack two unanticipated operational issues that negatively affected the performance of the iEMS: (i) how snow cover materially impacted PV performance, which needed to be accounted for in the iEMS machine learning algorithm; and (ii) how significant changes to the customer’s load profile, stemming from a change in electric vehicle (EV) charging, adversely affected demand savings.

The end results of the case study were overwhelmingly positive: solar PV was able to reduce 25% of the site’s maximum demand and the addition of the iEMS-enabled storage system shaved an additional 24%. Over the course of the first year, the combined system captured 71% of the maximum demand savings possible. This includes two months of sub-par performance due to the unexpected issues mentioned above. The results section of the case study details specific instances where: (i) the iEMS reduced peak demand to compensate for days where there was no PV production; and (ii) the iEMS complimented PV system production to shave shoulder load and achieve elevated levels of demand reduction. Lastly, it is important to mention that the iEMS’s peak shaving performance generally improved throughout the case study period, which demonstrated its ability to learn and improve over time.